Reagan Warned Us About Democrats In 1964 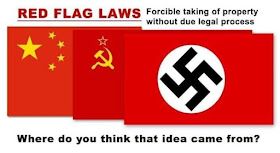 In 1964, speaking on behalf of Republican presidential nominee Barry Goldwater, Ronald Reagan warned us about the Democrats.

Today, around the country, Democrats are hell-bent on taking away our Second Amendment rights in the name of "security". They are enacting "red flag" laws, a gun confiscation scheme in the name of "security" and "safety". They are also trying to curb our free speech rights. "Red Flag" laws are also a clear violation of the Fourth Amendment (unreasonable search and seizures). Recently, Virginia Democrat Delegate Jeffrey Bourne introduced House Bill 1627, which would essentially make criticism of government officials a criminal offense. What's going on in Virginia, New Mexico and other states are perfect examples.

Many Democrats have come "out of the closet" to openly advocate socialism.

Here, in this clip from Reagan's "A Time For Choosing Speech", he describes what the Democrats are all about.